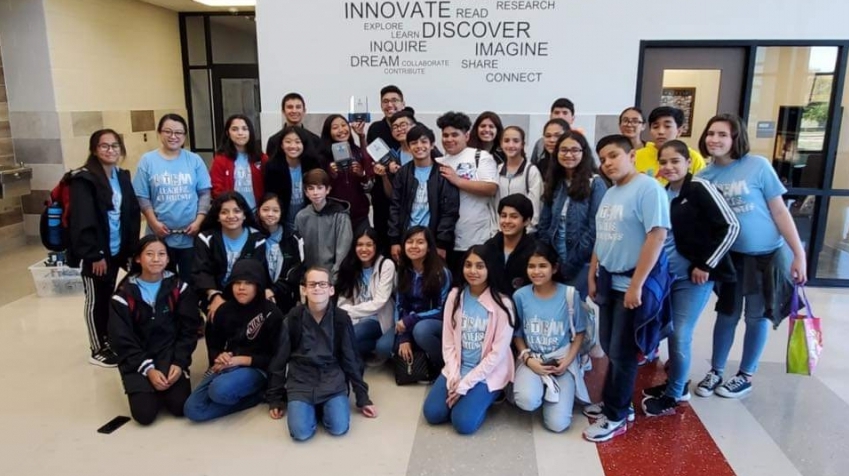 Why "Invest"?
Why "Invest"? We use the term "invest" to symbolize your investment the betterment of our communities.
Every share can raise $11

This project seeks to fund the costs for the STEM Robotics teams as they compete in the National Championship in Iowa as the only middle school in DFW area representing North Texas.

The goal of the STEM Robotics Program at Robert T. Middle School in Dallas, Texas, is to extend student learning beyond the classroom. Robotics students follow the engineering design process to plan, design and build robots to participate in VEX IQ Robotics Competitions presented by the Robotics Education and Competition Foundation. In the VEX IQ Robotics Competitions, teams of students’ design and build robots to collaborate and strategize with teams from around the world in a game-based engineering challenge. Classroom STEM concepts are put to the test on the playing field as students learn life-long skills such as teamwork, leadership, and effective communication to accomplish their goals. These tournaments are held year-round at the regional, state, and national levels. Teams qualifying for State Championships have the opportunity to compete at the National Level in Iowa. State Champions qualify to compete against the best robots in the world at VEX Worlds Championship in Kentucky!

The STEM Robotics Program at RTH MS is composed of a passionate group of 6th-8th grade students who arrive at school before regular school hours daily at 7 am for robotics practice. In addition, they practice during school hours, and sometimes, even after school. Their tenacity paid off! So far in the 2019-2020 season, the STEM Robotics teams won 11 trophies across 5 tournaments all within less than 2 months! These awards qualified ALL three robotics teams to both State Championship AND National Championship in Iowa. Currently, Robert T. Hill Middle School is the ONLY middle school representing North Texas in the National Championship.

This project seeks funding to cover costs for the STEM Robotics teams going to the National Championship in Iowa, and potentially to the World Championship in Kentucky.  Funds will be used to cover the costs of team registration fees, charter bus, hotel, food, and team-sponsored giveaways (pens, bracelets, buttons etc.) for the pit area table.  Any donation would be greatly appreciated! For your sponsorship, we will recognize you in our team’s pit area on a banner displayed for all to see. Many thanks for your support and generosity!

If fundraising goals are not met, funds received will be allocated toward the trip to VEX World Championship in Kentucky and other STEM Robotics trips.

These amazing kids did it again! They won yet another trophy on 2/8/20. They now have 12 trophies this season alone!

I believe in these kids!!!! I see GREAT things happening to them!
They are the only teams representing North Texas at the National Championship! They have until the end of February to raise funds for the trip. Can I challenge the community to match my donation? Let's make this trip to Iowa a reality! :-)

You guys are amazing!!! Keep it up!

This project seeks to fund the costs for the STEM Robotics teams as they compete in the National Championship in Iowa as the only middle school in DFW area representing North Texas.

You will now receive periodic emails regarding the progress of Got STEM? Help Represent North TX at Nationals