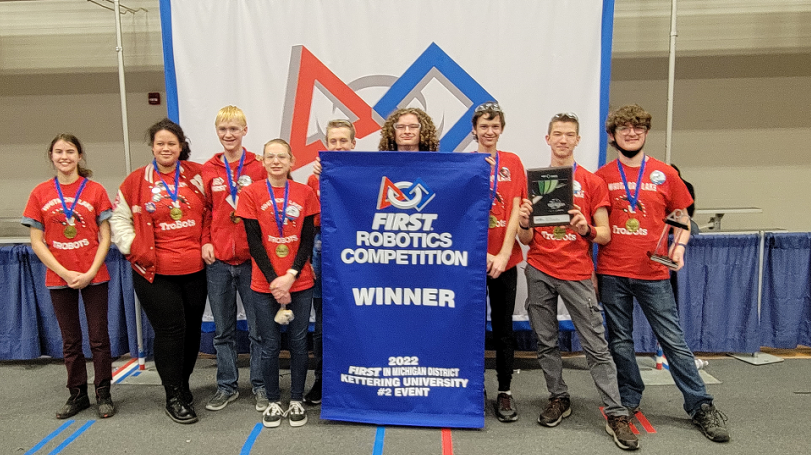 With these funds we will cover the registration, transportation and room and board costs for our Whitmore Lake High School Robotics Team, The TroBots, team number 3668, to go compete at the First Championship in Houston, Texas.

Their season consists of a 6-week build season where our 10 students and about 5 mentors spend around 1000 hours or more building our robot.  After the build season, they have two events over the course of another six weeks to compete in all while still tweaking the robot.

Their first event was in week 2 at Kettering University.  This event went very well. The TroBots were the second alliance captain leading into playoffs and ended up the winners of the whole thing.  They also won the Innovation in Control Award!
Their second event was in week 6 at Woodhaven High School.  This event did not go as planned, but they did end up on the third alliance.  Their alliance got past the first round though, beating the 6th alliance.  They also won the Innovation in Control Award again.
With all this success the TroBots were able to get a ranking of 25 in the state, securing our spot in the Michigan State Championship at Saginaw State University.  This event was very hard-fought.  In their division after qualification marches, they ended up in 13th place. They were picked for the 8th alliance in playoffs where they lost to the number 1 alliance.
Accumulating all they did at their 2 events and at the Championships, they secured their spot at the First Championship in Houston, TX April 20-23!
This is only their second time in team history going to Worlds, so it is important we go. The team worked so hard and their robot reflects all their efforts.

If we do not reach our goal we will deplete all the fund The TroBots we have raised since the team's inception that would be necessary for a successful season next year.

The Whitmore Lake Robotics club serves students from all schools and home schooled students in the area. They have robotics teams at all levels K-12. They also help with a variety of STEM activities and community events in Whitmore Lake and surrounding communities. These funds will help them all.

You are the little school that could!

Currently serving at the Community Relations Director for a fantastic small school district in Michigan.